May 11, 2015
Salt Lake Community College held its commencement ceremony Thursday at the Maverik Center in West Valley City for about 900 of its nearly 3,800 graduates. 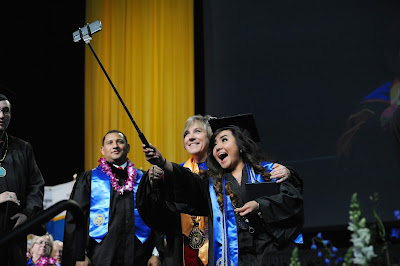 Justine Tabligan and President Deneece G. Huftalin say "cheese."
SLCC President Deneece Huftalin told graduates to “dare greatly” and to ask “hard” questions of themselves and the world. “The last SLCC lesson then is to never stop dreaming, imagining a new place, idea, or challenge – to ride out your life with full throttle…an open and questioning mind, a full heart, and a thirst for continued invention,” Huftalin said. “Be the doers of your dreams. Create your own story and remember, as Phillip Pullman stated, ‘Thou shalt not’ is soon forgotten, but ‘Once upon a time’ lasts forever. Congratulations.”

Jessica Jackley, cofounder of the global micro-lending giant Kiva, delivered the Commencement address. Kiva has become one of the fastest growing social benefit websites in history by facilitating nearly $700 million in loans for individuals in 216 countries. Jackley also cofounded the pioneering crowd-funding platform ProFounder. “Today is a huge milestone for everyone in this room – whether you are the one walking, being awarded your hard-earned degree, or whether you are cheering someone on,” Jackley said. “And I’d bet anything that a dream is what started your journey here at SLCC....And I’d bet that your dreams for the future are what sustained you, when it was not easy to keep going…You imagined a better future. And you did what you needed to do to make that real.” 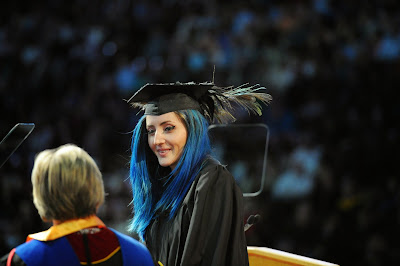 A graduate makes her way across the stage at the Maverik Center.

This year SLCC graduated almost 250 students from 79 different countries, and within Utah the College served graduates from 23 counties. More than 530 graduated with a cumulative GPA of 3.8 (in a 4.0 scale) or higher while an additional 896 recorded GPAs of 3.5-3.79. The youngest graduate was 16, the oldest 70.

The College presented Amy Rees Anderson and Jeffery R. Nelson with Honorary Doctorate degrees. Rees Anderson is managing partner and founder of REES Capital and was also the founder and CEO of MediConnect Global. Nelson is CEO of Nelson Laboratories and has served as Governor Gary Herbert’s chair over the STEM (Science, Technology, Engineering and Mathematics) Action Center Board.

SLCC honored Ruby Chacon and Paul Mayne as its Distinguished Alumni. Chacon is a well-known Chicana artist who cofounded the Mestizo Institute of Culture & Arts in Salt Lake City. Mayne is founder and CEO of Utah-based Bloom Built, creator of the hugely successful Day One journaling app that earned the “Apple Design Award” and Apple App Store’s 2012 “App of the Year” award. 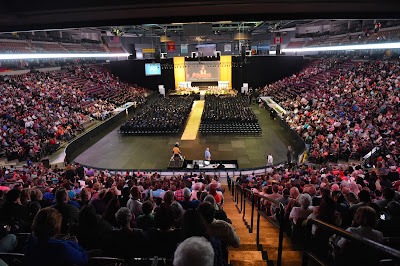