January 31, 2017
Salt Lake Community College’s Grand Theatre, as part of its Backstage at the Grand series, will produce a professional production of William Shakespeare’s Comedy of Errors Feb. 3 – 25. Jamie Rocha Allan, who worked at London’s Globe Theatre, will be directing this production, which is the first Shakespeare play produced by the Grand Theatre. 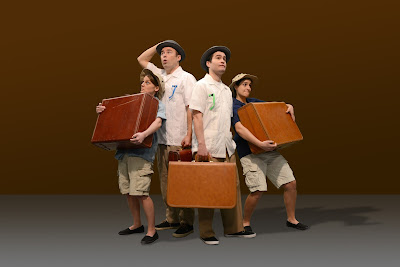 Cast of 'Comedy of Errors' at Grand Theatre
The Comedy of Errors tells the story of two sets of identical twins who were accidentally separated at birth. Antipholus and Dromio of Syracuse, arrive in Ephesus, which turns out to be the home of their twin brothers. When they encounter the friends and families of their twins, a series of wild mishaps based on mistaken identities issues. The hysterical Comedy of Errors is one of Shakespeare's early plays, and it is the Bard’s shortest and one of his most farcical comedies.

Tickets are on sale now at www.thegrandtheatrecompany.com. Backstage at the Grand productions provide a more intimate setting, with seating on stage that puts viewers close to the actors and entertainers.