November 11, 2015
Journalist and author Naomi Klein told more than 800 people at Salt Lake Community College’s Grand Theatre in November that until about six years ago she had been writing books, which she calls “ammo for activists,” about economic justice, human rights, labor abuses, free trade and privatization, and that she “outsourced” the subject of climate change to “green groups.” She went a step further and said people would rather watch “cat videos” online than read a story about melting glaciers. 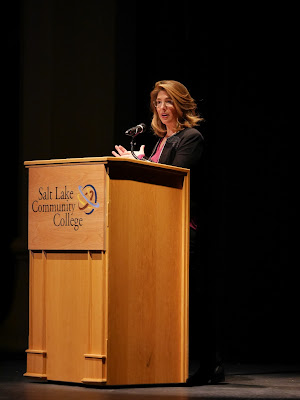 Naomi Klein at the Grand Theatre

Klein appeared at the Grand as part of the Tanner Forum on Social Ethics, presented by a generous gift from the O.C. Tanner Charitable Foundation with funding from SLCC Art and Cultural Events programming. She gave a 45-minute presentation, followed by a Q&A and book signing. Klein’s latest book, “This Changes Everything: Capitalism vs. The Climate,” is the 2014 winner of the prestigious Hilary Weston Writers’ Trust Prize for Nonfiction. Earlier in the day she met with students on the SLCC Taylorsville Redwood Campus, where she was asked how she came up with the name of her new book.

“Climate change doesn’t just load the dice for the weather, it’s an accelerant for all kinds of other issues as well,” Klein said. A storm becomes a “super” storm or a drought becomes a “severe” drought because of climate change, she added. She also said private enterprise can have a role in positively affecting climate change in ways that are socially responsible, albeit in an economic system that is built to value short-term profit and growth above all else, including the environment. But instead of acting in an impactful way toward climate change, Klein said the past two and a half decades have been “wasted” doing the wrong things and talking about a rapidly evolving subject in a way that is stuck in the 1990s. She invoked climatologist Michael Mann’s notion of the “procrastination penalty” and how drastic measures are now required over “non-radical” options for stemming the tide of climate change and the “inaction” that has taken the world in the wrong direction. “We now need to cut our emissions very deeply and very rapidly to stay within the carbon budget,” she said. 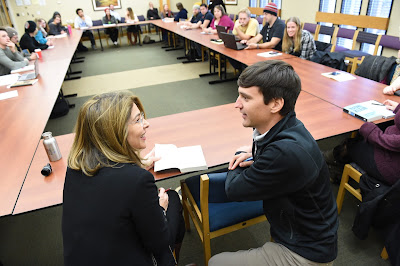 Naomi Klein talks to students at the Taylorsville Redwood Campus.

Klein told students, and later a near sold-out crowd at the Grand Theatre, that efforts to focus more on climate change can also be designed to help solve problems like economic inequality and racial injustice. “In short,” she said at the Grand Theatre, “a more humane society that values the lives and experiences and contributions of all of its members, including people who have been forced to leave their home countries because of wars fought over fossil fuels, because of the impasse of unfair trade agreements that our governments have pushed and, indeed, because of climate change.” Klein also plugged her new film “This Changes Everything,” wherein a “symphony of voices” on the “front lines” of climate change are depicted as a “celebration and exploration” of the movement. She wanted the film to come out in time for the upcoming United Nations conference on climate change in Paris. Her favorite screening so far, Klein added, was in Amsterdam, where it was shown on the wall of a coal-fired power plant.

Klein’s first book, “No Logo: Taking Aim at the Brand Bullies,” was also an international bestseller. She is a contributing editor for Harper’s, a reporter for Rolling Stone, an internationally syndicated columnist and a member of the board of directors for 350.org, a global grassroots movement to solve the climate crisis. Her reporting from Iraq for Harper’s won her the James Aronson Award for Social Justice Journalism in 2004 and in 2014 she received the International Studies Association’s IPE Outstanding Activist-Scholar award.