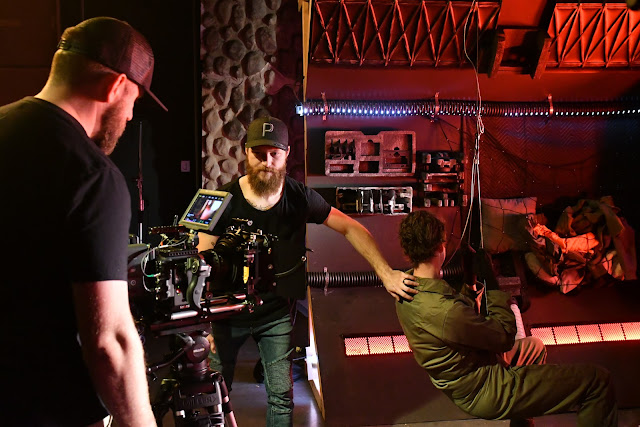 Dylan Lunt (center) directing on the set of his short film Circadian.

Sometimes, to figure out the right career path as an adult, you need to go back to what captured your imagination as a child. Growing up, Dylan Lunt loved movies. Now a husband and father, Lunt, 28, aspires to make movies while studying filmmaking at Salt Lake Community College.

Throughout his adult life, Lunt sampled several jobs and college programs – game design, doing hair, art school, special effects in film – and all seemed to lead back to one thing: filmmaking. More specifically, the Bountiful resident wants to direct films.

That’s how Lunt ended up in David Lehleitner’s Film Directing and Techniques class at SLCC’s Center for Arts & Media. Lehleitner is an assistant professor of film production for SLCC at its South City Campus in Salt Lake City. 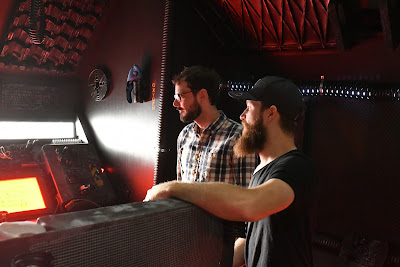 “This is jumping into the deep end,” Lehleitner says about his class. “You write, direct, produce. Everyone makes a movie – it’s no longer talking about it. You gotta do it. People discover they don’t want to be a director in this class.”

Or, like Lunt, the draw to direct becomes all consuming. This past semester he and his wife, Brie Seaton, spent a chunk of their own money (not a requirement) on making his short film, using SLCC’s 4,000-square-foot soundstage at South City Campus. Titled Circadian, it’s about a pilot who wakes up to find half of his spaceship and his wife both missing, with only artificial intelligence to keep him company. Seaton, with Lunt’s help, built the spaceship used inside the soundstage. He, or rather they, are way into filmmaking.

“It’s my last class,” Lunt says about Lehleitner’s course. “And I just got tired of making the same old student films you see. I just kind of wanted to go all out and be proud of it when I graduate.” He expects to complete his Associate of Applied Science degree in Film Production this fall.

As directors of their own films, Lehleitner’s students are given a small budget (about $100) to purchase props or supplies, and they have access to state-of-the-art lighting and equipment such as RED cameras to make their films. Students can bring in pros – Lunt auditioned professional actors and used a friend who is a professional director of photography – or they can use SLCC students from other classes. Briana Franco was taking Cinematography 2715 when she heard about the opportunity to work on Lunt’s film. 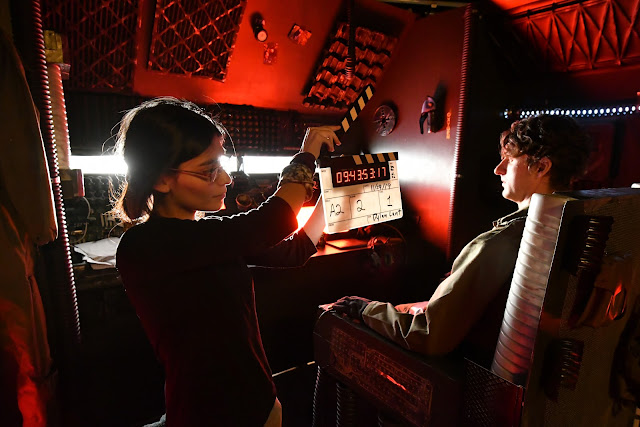 “It’s been a lot of fun,” says Franco, 21, who will graduate next year from SLCC with associate degrees in Film Production Technician (one of the few females in this major, she points out) and Communication Studies. For Circadian, Franco does everything from operating a camera or the slate just before the director yells “Action!” to running to get water for the cast and crew. “I understand there’s a lot you need to learn. There’s so much that goes into a film. It’s really exhilarating.” After SLCC, Franco plans to transfer to a four-year school to earn a bachelor’s degree in communications and then work on films, at first as a production assistant before moving up to unit production manager.

On the set of Circadian in late October, Lunt’s challenges are to shoot professional actors Nikolas Mikkelsen and Nicole McClellan in scenes that involve smoke (using a smoke machine), wind (a leaf blower), zero gravity (chains holding up Nikolas from a high ceiling) and creative lighting (achieved with colored gels and lights with variable temperature controls). Lunt has to be a master multitasker, attending to every detail. Lehleitner says movie sets can be stressful places, but Lunt manages to do it all while keeping it light, relying on caffeine, humor and frequently quoting from movies – from his childhood or adult life – to keep the crew banter lively and fun.

“Is this too Stanley Kubrik?” someone asks.
“What time do you anticipate camera wrap?” another pipes in.
And then everything and everyone goes quiet, just before Lunt shouts, “Aaaaaand, action!”

Lunt hopes to screen Circadian for an SLCC audience in mid-December, and then the goal is to submit it for entry into film festivals. 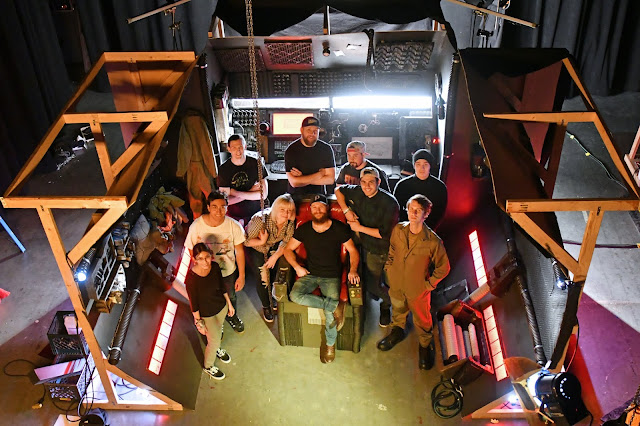 SLCC film directing student Dylan Lunt (seated) and cast and crew on the set his wife Brie (next to Lunt) and he built for his film Circadian.