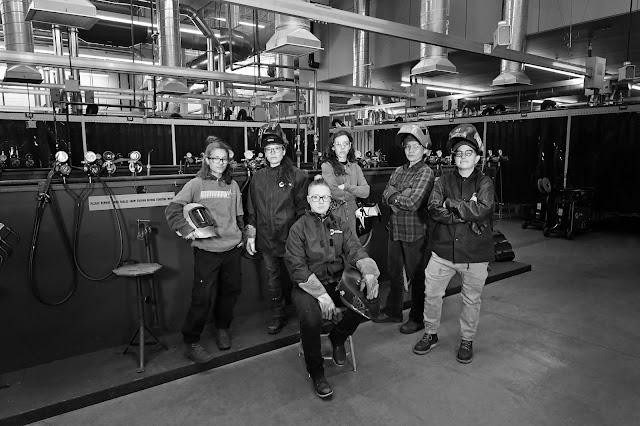 Her name is Alex. She works in a man’s world.

That’s how the narrative in the official trailer for the 1983 film Flashdance begins. Viewers see a person working in a dark industrial setting pause to remove a mask, revealing a woman. In the movie, Jennifer Beals plays the role of a tough female welder in Pittsburgh.

Never mind that Alex dreams of being a dancer. The fact that she earned a living welding stayed with Amber Huddleston, who first saw the movie when she was a teen. That image stuck with Huddleston and factored into her own decision later as an adult to pursue welding. It was the power of seeing someone who looked like her doing something unconventional that helped her believe it was possible – becoming a female welder.

Now Huddleston, 32, is one of six females currently taking welding classes at Salt Lake Community College’s Westpointe Workforce Training & Education Center. “Have you ever welded?” she rhetorically asks. “It’s fun as (heck)! It’s like sewing with fire,” she adds, referring to a technique known as stitch welding.

In 1983, it was rare to see a woman behind a welding mask. Nearly 40 years later, that image is gaining popularity, though females still only make up about six percent of the workforce nationally in the areas of welding, soldering and brazing combined.

Who are these women? What are they thinking behind those masks at SLCC?

Huddleston, using the GI Bill to pay for her training as a welder, someday wants to build brewing equipment. 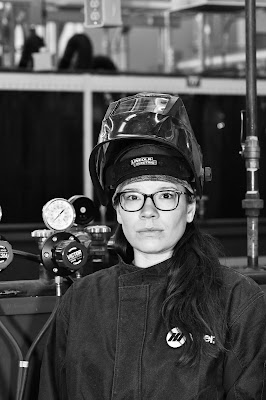 Competitive snowboarder Egan Wint, only 18 years old, plans on using her welding skills to construct rails for doing tricks on the slopes. 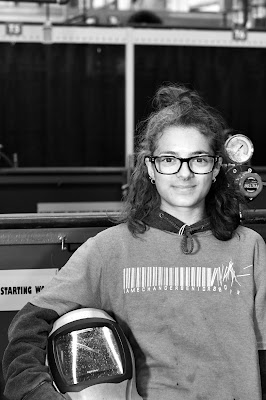 Leilani Lee, mother of three girls, aims to parlay her welding experience into owning her own inspection business. 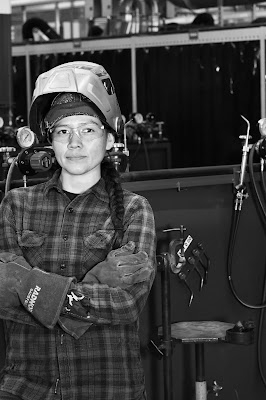 Hillary Van Patten’s goal while working in construction is to one day weld at a custom motorcycle shop. 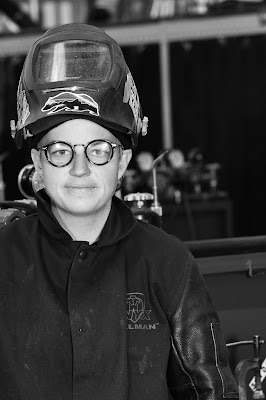 Lydia Hall, who has a four-year degree in writing and linguistics, sees herself using orbital welding to help build water purification systems in third-world countries. 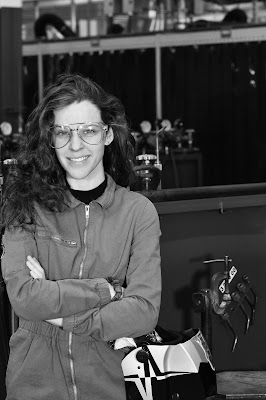 Welding dynamo Kylie Hrubes, whose heart stopped for three minutes after a 2014 head-on collision, wants no less than to build anything and everything she can. Torch in hand, a zest for life and an unbridled ambition in her back pocket, nothing will stand in Hrubes’ way. 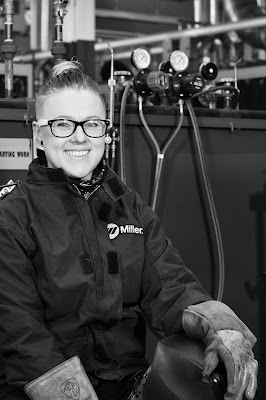 It may surprise you to learn these women have heard directly – or indirectly – that females aren’t, can’t or shouldn’t be welders. Or they’re condescendingly told that females can use welding to make art – you know, pretty things. The comments and cajoling to quit and pursue something less gritty, hard and, well, manly, come from family, friends and strangers.

Try telling any one of these six female welding students at SLCC they can’t or shouldn’t weld, however, and you will get reactions that range from a quiet confidence as they resolutely buck stale societal expectations or an earful in opposition laced with a few choice expletives. One side of Wint’s family, for example, told her she should pursue something more “gender normative,” like becoming a nurse or teacher. “I don’t need that advice,” Wint says. “I’m doing my thing, and I’m really enjoying it.” 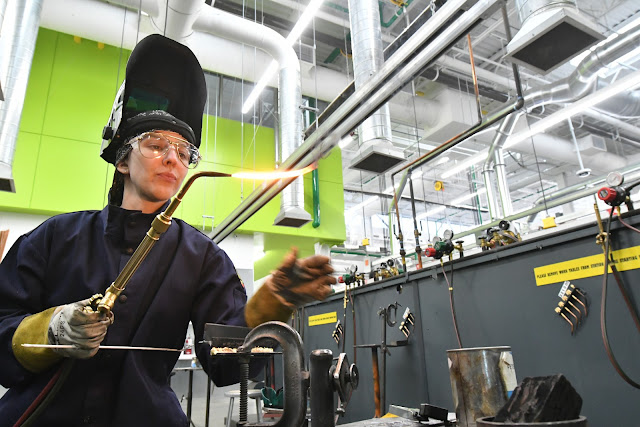 The naysayers, the unevolved, the skeptics and pessimists are part of what drive these women to continue and succeed where society still says they shouldn’t. They also love the work. They see the potential for growth and higher incomes – average pay for a beginning welder is about $16-$20/hour (differs by state) but can rise sharply from there depending on who you work for and the difficulty of the welding techniques you practice.

On any given day, masks down, gender hidden from view, sparks flying, the female students at SLCC are out-welding or even mentoring their male counterparts at the Westpointe Center.

Assistant welding professor Frank Buckler says females tend to follow directions better and excel at the subtleties that might make superior welders, like depth perception and manual dexterity. Buckler is pleased to see the number of females taking welding classes on the rise in recent years. 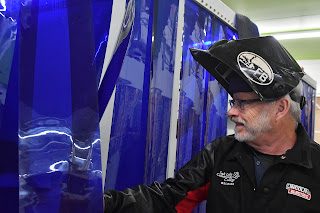 Buckler’s own mother was a welder on shipbuilding crews during World War II and is a local legend in Brighton, Michigan, where she used her welding prowess to ready snowplows in a pinch during a storm. She was his early inspiration. “I’m so proud of these guys,” he says, looking at the group of six gathered recently in one room at Westpointe. “They are knocking down barriers.”

Huddleston is already employed as a welder by Williamsen Goodwin Truck Body Co. while she attends SLCC. “As a female doing welding, I can write my own paycheck for the rest of my career,” she says.

Lee is working as a welder for JT Steel, based in West Jordan. Van Patten picked up welding while working construction for Mark 25 Homes in Park City. “I will see where it takes me,” Van Patten says. “My work helped pay for my education. They saw what I was doing up there and thought I should continue it. I like working with my hands.” Hrubes welds for SLCC on the grounds crew. 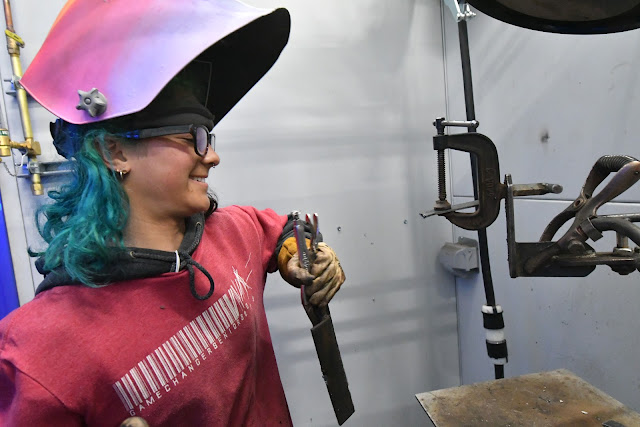 “The jobs are out there,” Buckler says. “You just have to find them.” Four of the women at SLCC are going for two-year Welding Fabrication & Inspection degrees, and two are pursuing certificates of completion that take less time and get students working in the field sooner.

Hrubes and Huddleston are also working on giving other women a leg up with a business they’re starting called Forged by Female. The number of female-owned welding businesses, Huddleston says, is a “small pin tack” on the map. They want to change that.

The fact that Hrubes is even standing, let alone able to weld, is a story in of itself. On Dec. 11, 2014, she was a passenger in a vehicle that hit another car head on at over 70 mph. She wasn’t wearing a seatbelt, and her airbag didn’t deploy. She suffered broken bones in her back, hip and pelvis, was bleeding internally, had a small stroke and was told early on by doctors that she would likely always be on disability and unable to hold down a job. She lives with constant pain daily. “As of today,” she says, “I hold down three part-time jobs and go to school full time.”

Hrubes recently competed for and was awarded a highly coveted paid internship with Dominion Energy. She was the only welder and one of the few community college students among 125 students from across the country, some from schools like Dartmouth, Princeton and Cornell, all invited by Dominion to compete. As one of 70 students who were offered internships, she will start next summer at $25 per hour, have her housing paid for and will get paid by Dominion to continue with school. 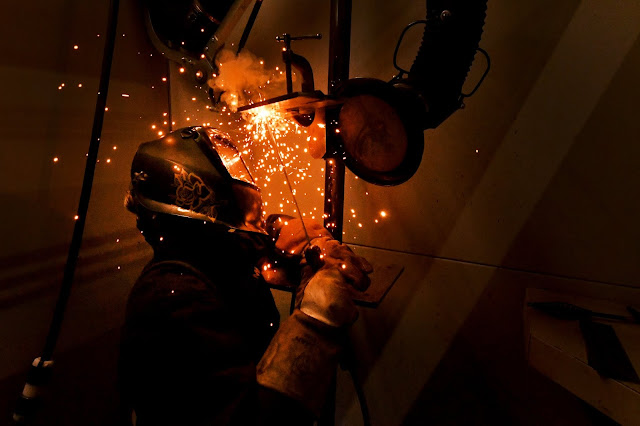 Each of the six women at SLCC has an inspiring story, from battling and beating addiction to, as in Lydia Hall’s case, figuring out that life is too short to feel stuck in a high-stress job for relatively low pay, which was her motivation for deciding to take the leap into learning a trade. Her parents, she notes, are supportive of her welding pursuits. “They think it’s setting me up to live whatever life I want,” she says. “There’s nothing wrong with the trades. Independence and financial security are where it’s at. You can always get a four-year degree. But wouldn’t it be great to make money?”

Leilani Lee, 33, married with daughters who are 15, 7 and 5, is Navajo and attending SLCC on a scholarship for Native American students. Lee dropped out of school early in life and soon began working multiple jobs, including as a seamstress and in restaurants. In one week when she was still a teen, she got her driver’s license, rented her first home and bought a car. “A big reason I decided to go into welding is because I have seen so many Navajo and other Native American women enter the trades and, for me, it just came naturally,” she says. “I suppose that is another reason that I am not intimidated by the male-dominated industry. I always try to remind myself why my work is meaningful and to teach my daughters to walk in beauty – Hózhó.”

That last word – Hózhó – is a Navajo word that means “interconnectedness between beauty, harmony and goodness in all things physical and spiritual that results in health and well-being for all things and beings.” Interconnected – you know, like they’re welded together. 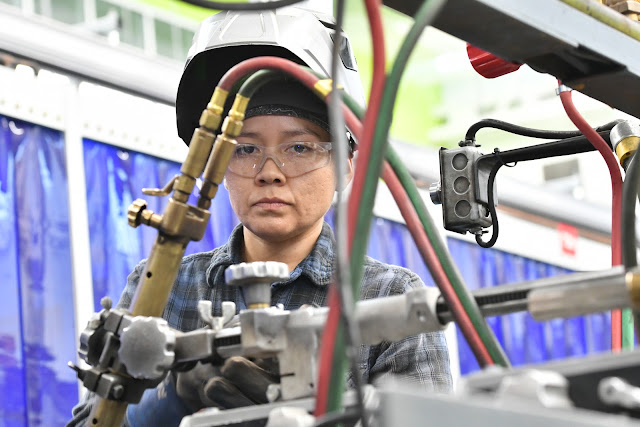