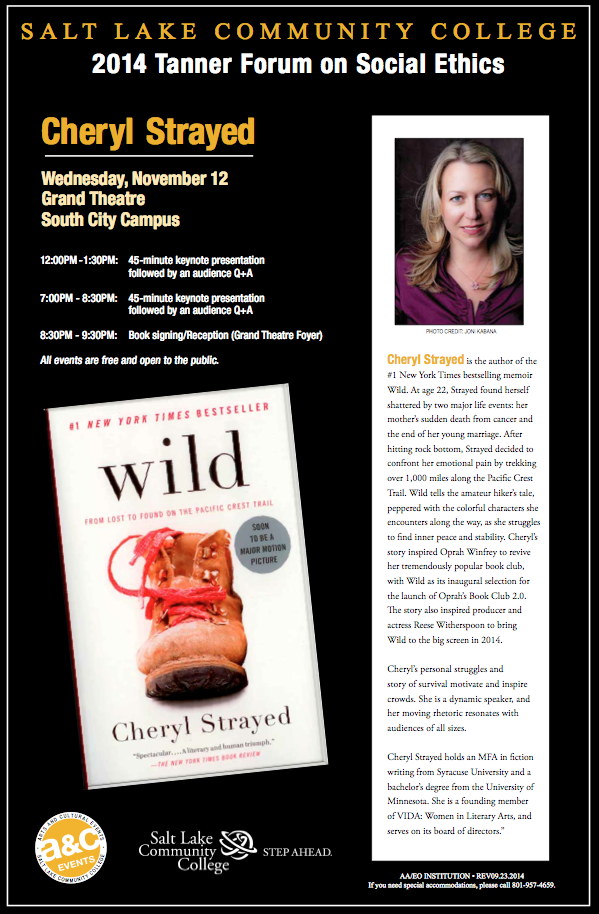 Strayed will appear November 12, at noon and again at 7 p.m. at the Grand Theatre on SLCC’s South City Campus, 1575 South State Street, Salt Lake City. Strayed will be available for a book signing following her 7 p.m. appearance.

"Wild" has been made into a movie due to be released in December starring Reese Witherspoon as Strayed, who has written two other books that include her latest "Tiny Beautiful Things," which was also a bestseller. Her book "Wild" is a memoir of her 3-month, 1,100-mile hike along the Pacific Crest Trail on the West Coast of the United States. "Wild" was also chosen as Oprah Winfrey’s first book for her Oprah’s Book Club 2.0.

“Strayed’s memoir 'Wild' is an intimate portrayal of a troubled woman trying to right herself amid the backdrop of woman versus nature,” said SLCC Public Relations Director Joy Tlou. “I found her novel to be engaging, enlightening and entertaining, as I’m sure audiences at the Grand Theatre will find the author when she appears as SLCC’s Tanner Forum speaker. We’re excited and fortunate to have her at SLCC.”

The picturesque Grand Theatre is a 1,100-seat venue located at Salt Lake Community College’s historic South City Campus, home of the innovative and state-of-the-industry Center for Arts and Media. The Grand Theatre was chosen by Sundance Institute to be a screening venue during the 2015 Film Festival. The Grand dates back to the 1930s when it was part of South High School, which SLCC purchased in 1989, a year after the school closed. The theatre began offering productions that year and has since with great care and expense retained its Depression-era charm and attraction while also incorporating the latest technology in lighting and sound. Every season the Grand is host to award-winning theatre and dance productions and concerts that attract arts enthusiasts from all along the Wasatch Front. Students and faculty in the arts at SLCC’s South City Campus now enjoy and, as a result, excel from having access to the Grand’s nostalgic look and feel and the Center for Arts and Media all in one place.