May 05, 2016
Salt Lake Community College graduates May 6, at 9:30 a.m., will hear from Gretchen W. McClain for the 2016 Commencement keynote address at the Maverik Center in West Valley City. 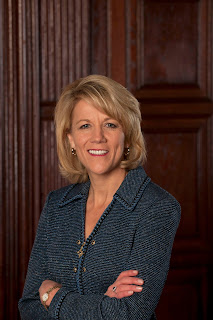 Previously, McClain served in numerous senior executive positions in both the government and industry starting from a systems engineer. As the founding President and CEO of Xylem, an S&P 500 company and global water technology company with revenues of $3.8 billion, she oversaw the successful creation and spin-off of the company from ITT Corporation. At ITT, she served as President of ITT Fluid Motion and Control, a $4.5 billion diversified leading manufacturing company of highly engineered technology and equipment, where she led the organization to double-digit revenue growth. Prior to ITT, McClain held a number of executive positions at Honeywell Aerospace (formerly AlliedSignal), including Vice President and General Manager of the Business, General Aviation, and Helicopters Electronics Systems Division and Chief Technology Officer of Aerospace Engines and Systems. Earlier in her career, McClain spent nine years with NASA, including serving as Deputy Associate Administrator for Space Development, the top management position responsible for NASA’s International Space Station (ISS). She graduated from the University of Utah with a Bachelor of Science in Mechanical Engineering and received the University’s prestigious Founders Award in 2015. McClain was inducted into the Utah Technology Council Hall of Fame and is the first woman to receive this honor.