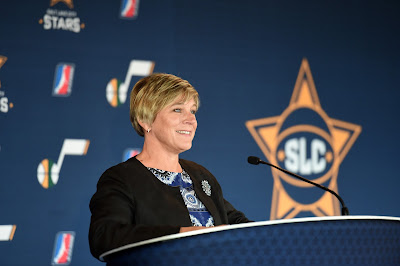 From November 2016 until April 2017, the Stars will host 24 home games at SLCC. In 2015 the Utah Jazz became the eighth team with full control over an NBA D-League team with the purchase of the Boise-based Idaho Stampede. The team’s new name pays tribute to its American Basketball Association roots in the 1970s when the Utah Stars won the league championship and to the WNBA team Utah Starzz that played in Salt Lake City from 1997 to 2002.

“As the only comprehensive community college in the state of Utah, we are happy to be the venue where communities and families throughout the state can come together to watch up-and-coming athletes play the game at the highest level,” said SLCC President Deneece G. Huftalin during a press conference at Vivint Smart Home Arena. “The excitement of this new team will bring hundreds of fans to one of our largest campuses, exposing them to the high-quality learning and relevant workforce training opportunities SLCC offers. And I'm sure the cities of Taylorsville, Murray, West Valley City and others located just next door will also experience the energy this team will draw. We couldn't be happier to be working with the Utah Jazz organization and the Miller family again in yet another partnership. Salt lake community college is committed to making this venue a warm, welcoming and exciting place to watch quality basketball and to sharing this beautiful facility with an even wider fan base.” 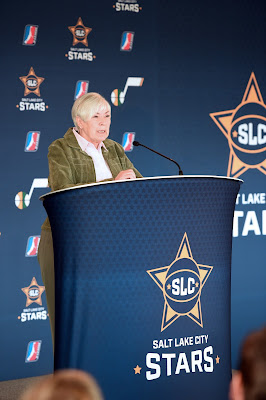 “The relocation of our D-League team to Utah will further align our efforts in player development and basketball operations to support the Jazz,” said Dennis Lindsey, Utah Jazz general manager. “The close relationship will strengthen our team on the court by providing our younger players a chance to grow in an environment that is consistent with Jazz basketball. Additionally, it serves as a training ground for all aspects of our organization, from coaches to support personnel.” 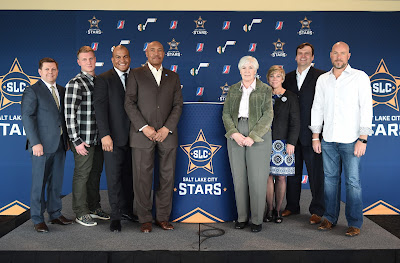 A group portrait after the press conference.

The Salt Lake City Stars will begin play with the 2016-17 season and will host a 24-game home schedule between November and April at Salt Lake Community College. For more information on the Utah Jazz D-League affiliate, please visit www.slcstars.com or follow the team @slcstars on Twitter, Facebook, Instagram and Snapchat. Fans interested in purchasing Salt Lake City Stars season tickets can visit www.slcstars.com for information or call (801) 355-DUNK.