April 02, 2016
The president of Salt Lake Community College and her cabinet have piloted it. So have a bunch of high school students. And the great equalizer has been that the CRJ700, even though it’s a simulator, is pretty hard to land for a novice at the controls for the first time. 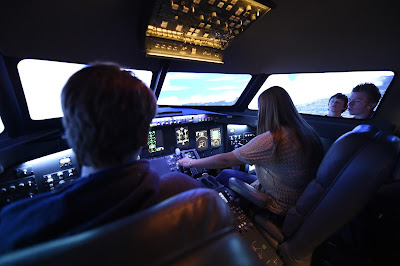 High School students test out the flight simulator at Westpointe.

Under the direction of co-pilot and assistant professor Erwin Zundel, a typical landing in the simulator can go about like this one, which features a high school student at the controls and Zundel doing the talking:

Keep the nose down.
Power back.
Keep coming back with it.
Give yourself full flaps.
Line yourself up with the runway.
When he calls ‘500 feet’ change the position of your nose.
Hands on the throttle—we’re all going to die (laughter follows).
Start raising the nose up.
Head toward the runway.
Looking good.
Nose coming down.
Gently pull back on the yoke.
Pull back! Pull back!
No! Ooooh! (pause)
Not bad.

The student crashed the plane—but, again, it’s only a simulator.

SLCC President Deneece G. Huftalin’s takeoff was, well, a little shaky to say the least. But she nailed her landing during the President’s Challenge event in October, when every cabinet member took turns in the simulator while trying to best each other. Dr. Roderic Land, special assistant to the president, walked away with the first-place trophy for having the smoothest and most successful (as in, he didn’t crash) takeoff and landing. “I look at the experience as kind of a metaphor for life, school or your career,” Huftalin said. “Sometimes, with a new beginning, we have a rough takeoff. But once we learn the controls and get comfortable in the air, the whole world opens up as to where and how we can land. Some of our students are literally learning to fly with this amazing new simulator; others are learning to fly in their own career fields." 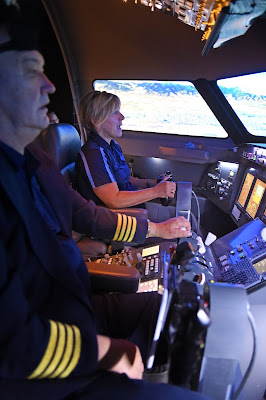 The purpose of having the cabinet and, at an earlier event, the high school students try out the simulator is to begin raising awareness—and a few eyebrows—about the new technology being used at SLCC’s Westpointe Center. ESP, Inc. (Engineering Support Personnel) purchased the once-mothballed simulator from a university, completely rebuilt it and in 2015 sold it to SLCC for about $250,000. “It has the latest version of Lockheed Martin’s software,” said Jim Williams, who worked with ESP to get the simulator running at SLCC. “We’re using the most modern technology that can go into this simulator. When it comes to a community college level, you are far superior than most. This really is a very sophisticated trainer. I think SLCC is fortunate to have found the means to install this system here. It will give you an edge up as being a leading college in providing jet transition training.”

The goal now is to develop a curriculum that will allow future pilots to transition from training on a single propeller system to a more sophisticated, complex commercial jet craft with the simulator. The actual CRJ700 costs about $25 million, seats up to 78 people and is typically used by a smaller regional airline like Skywest. It’s expected the simulator will be a regional and even national draw for pilots who are preparing to test for the FAA’s Airline Transport Pilot (ATP) license toward becoming certified to fly bigger jets. Students will likely spend about 10 hours using the simulator before taking the ATP test. “We should be ready by spring to offer a class utilizing the CRJ700,” said Gillette Samms, associate dean over the professional pilot program at Westpointe. “It fills quite a unique void.” Samms said demand for pilots is on the rise as more and more people travel and that SLCC’s simulator adds an element of training that airlines seek when looking to hire experienced candidates to fly their jets. 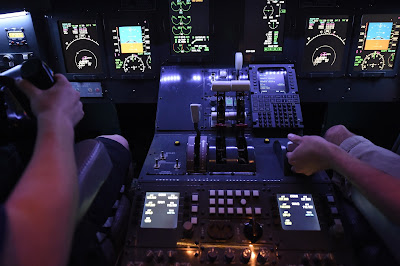 Control panel in the simulator.

Chris Johnson in 2014 earned an associate degree in SLCC’s pilot program after serving in the Army for five years, with two tours in Iraq as an explosive ordnance disposal technician. “Ever since I was a kid I always wanted to be a pilot,” said Johnson, 28, who grew up in South Ogden. “I used to watch planes take off and land at Hill Air Force Base.” He still remembers taking the controls of a plane for the first time. “It was awesome,” he said. “It’s like getting addicted to a drug—I was just addicted. It’s like nothing else.” Johnson was hired first by Cornerstone Aviation, the fixed wing flight school used by SLCC, and then he was brought on by SLCC as an adjunct instructor. These days he flies small jets for a firm in Phoenix. He said SLCC’s new simulator will give students a chance to see and control the type of systems they will encounter on bigger jets.

Granite Technical Institute teacher Carl Readicker brought a bunch of high school students in an aviation program to try out the new simulator, which is a bit bigger than the Cessna trainer they’d been using. The goal is to keep bringing young students to the cockpit of the CRJ700. “It gives them an idea of where they’re going from here,” Readicker said. “This is absolutely incredible. This is an opportunity for students to go up to the next level in their training and to advance beyond a regular trainer and to see what opportunities lie ahead for them.” 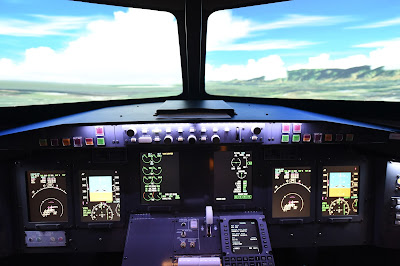 A view from the simulator's cockpit.

Olympus High School student Zachary Nelson, 17, took a turn at the simulator. “I would love any job that would give me the ability to fly a plane,” Nelson said. “Even if it was crop dusting, I would just love to fly in the air.” He loved piloting the CRJ700, compared to flying in a smaller simulator. “I felt like it had more power,” he said. “It was scary, exciting and all around amazing.” Shenille Fiack, 17, of Taylorsville High School, was equally impressed. “It was crazy,” Fiack said. “I thought it was amazing. The opportunity was fantastic, that we could come up here and get the opportunity to fly something different than what we fly at school.” Fiack already has her sights set on joining the Air Force, becoming a fighter pilot and someday flying one of the most important jets in the world. “I want to be in Air Force One,” she said. “That’s my dream.”