College’s vehicle fleet getting “greener” all the time…

April 02, 2016
They’re like two boys sharing a new toy car, prone to saying things like, “Ooh, this is so cool! Watch what it does!” Only Rand Webb and Edward Benson are talking about Salt Lake Community College’s commitment to alternative fuel vehicles. They often finish each other’s sentences or talk over one another. “He’s the scientist guy,” Benson says, “and I’m the nuts-and-bolts guy.” Webb calls Benson the “fleet guy” and himself the “EPA guy.” But the subject – a greener fleet of vehicles – is, well, pretty cool. 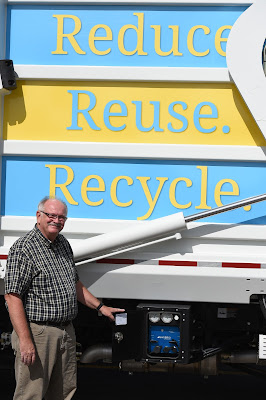 Actually, Webb, who used to work with the federal Environmental Protection Agency and the state Department of Environmental Quality on cleaning up polluted sites, is these days the environmental and health safety manager at SLCC, and Benson is the College’s fleet and logistics coordinator. Together, with support of SLCC administrators, they’re turning SLCC’s fleet of about 135 vehicles into a quasi “green” battalion of environmentally friendly modes of transportation. They have cars, pickups, a new garbage truck, a lawnmower and even a forklift that run on compressed natural gas (CNG), electricity, ethanol or a mix of gasoline and electricity. It means the College is doing what Webb calls the “right thing,” by emitting fewer pollutants into Salt Lake Valley’s already oft-polluted air. 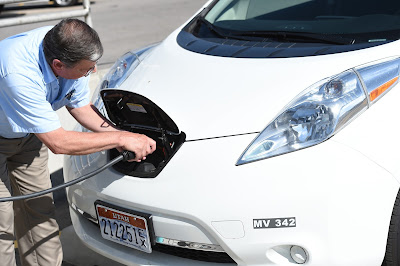 Ed Benson plugs in one of SLCC's electric vehicles.

The shift in thinking about what kinds of cars to purchase for SLCC’s fleet didn’t happen overnight. That’s because going “green” is sometimes more expensive, especially when it comes to vehicles. “We had to convince (administrators) that it’s the environmentally proper thing to do,” Webb said. “If you’re thinking we’re saving money by doing this, we’re not. It’s an air quality issue – we’re doing the right thing. We feel like it’s worth the money to have 85 percent less tailpipe exhaust and to contribute that much less to greenhouse gasses.”

While SLCC is going the “extra mile” with cleaner vehicles, the State of Utah is pushing the issue, demanding that half of all vehicles purchased for state fleet use rely on alternative fuels such as CNG. By 2019 all state fleet vehicles are expected to be running on alternative fuels. Benson figures SLCC is ahead of the game with about 37 percent of its fleet running on CNG. While CNG refilling stations were once in short supply, there are now about 45 CNG sites throughout Utah, including seven in the Salt Lake City area. One of those stations is located on the SLCC Taylorsville Redwood Campus. “It’s cheaper, it’s cleaner and it’s domestic,” Webb says about the CNG station on campus. “We’re buying a domestic product that Questar pumps out of the ground in Evanston. No matter what you think about global warming, is it wrong to have less greenhouse gas?” A CNG-powered vehicle also requires one third less maintenance than a typical gasoline vehicle. 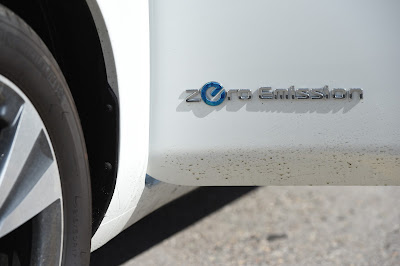 SLCC also owns several hybrid vehicles that run on gas and electricity, such as the Toyota Prius and Camry. Benson and Webb recently welcomed the addition two fully electric Nissan Leafs into the fleet. Webb can monitor from a computer on his desk just how the Leafs are performing with energy consumption and curbing emissions, and they can be plugged in to recharge at a station right outside his office. “SLCC has been a pioneer in this,” Benson said. “We have stepped ahead and done a lot of pre-planning, and support from administration has been fantastic. We’ve been a step ahead of all other (state) schools.” Benson said that in the next few years over half of all vehicles in SLCC’s fleet will run on alternative fuels.