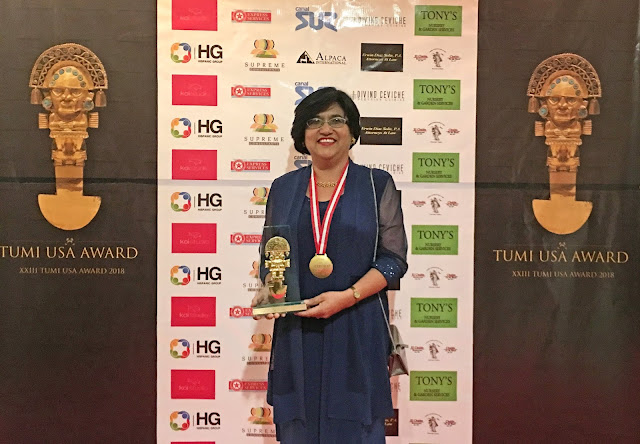 Luz Gamarra, multicultural student success coordinator for Hispanic/Latino(a) students with the SLCC Office of Diversity & Multicultural Affairs, recently received a Tumi USA 2018 Award, which recognizes “outstanding Peruvian immigrants from around the world who have shown a spirt of solidarity, service, passion and efforts for growth and prosperity of the Hispanic/Latino legacy.”

Gamarra, who migrated from Peru with her family in 2004, represented Utah as one of 15 states with Tumi USA honorees at a September conference in Miami.

Gamarra has worked at SLCC for 10 years and helped establish the school’s Amigos Mentores organization, a peer mentoring group designed to assist Hispanic students in reaching their academic goals. In her role, she has helped many people like student Mario Bernuy, who in his late 50s began attending SLCC at the behest of Gamarra. Bernuy eventually graduated from the college with honors and a degree in business. “He was the recipient of many scholarships and recognition efforts,” Gamarra says. “Furthermore, he was able to motivate his whole family. He inspired his family, including his sons and daughter-in-law, to return to school after they watched him successfully complete all of his courses. They felt motivated to come back and follow his example.”

In addition, Gamarra has demonstrated her commitment to the Hispanic/Latino community through her involvement with organizations such as the Westside Leadership Institute, designed to encourage leadership among students living in Salt Lake City’s westside communities.