Birth of a Flute: More than a Class for Making Instruments by Hand 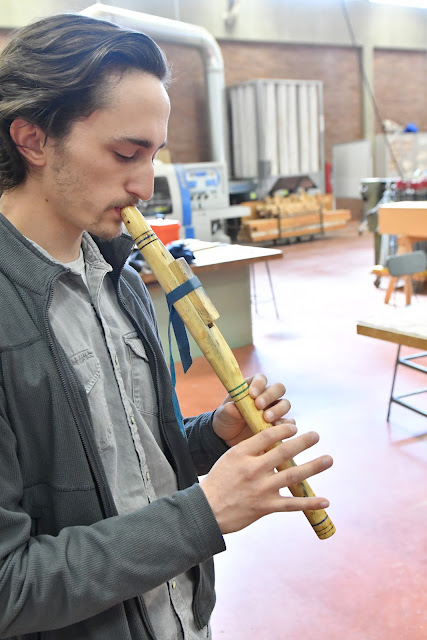 Matt Valdez plays a flute he made in Oscar Anderson's Birth of a Flute class.

The cacophony of saws, drill presses and the deafening drone of a thickness planer quiets, and the mesmerizing notes of Matt Valdez’s flute playing echo throughout the big room with high ceilings and natural light pouring into Oscar Anderson’s Birth of a Flute class. Instantly the atmosphere in the space changes – about 16 busy people suddenly are still, quiet, transformed by the soothing sound, the sense of calm.

Valdez, 22, started with just a piece of blonde-colored wood. Over many hours he used multiple tools, his imagination, decorative inlay and a blue leather strap to fashion the flute from scratch. When he is finished playing, there is a pause of people finishing a sedative thought or relishing a feeling they found wherever it is they went in their heads while Valdez played before everyone applauds. 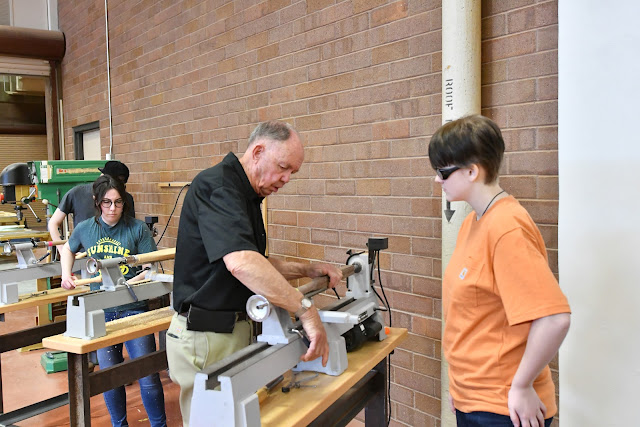 Oscar Anderson helps a student in his Birth of a Flute class.

On a sunny spring morning in April, Valdez played for Salt Lake Community College President Deneece Huftalin, invited to visit the class and accept the gift of a flute made by Anderson, who encouraged her to play. After about a minute of instruction, Huftalin blew into her new flute, adorned with a hand-carved Bruin bear. Anderson, who has been teaching young students and retirees how to make flutes for five years, immediately recognized Huftalin’s excitement when she finished.

“At times I wish I had a camera,” Anderson says. “To see them play the flute for the first time, the flute that they made, the reaction is, man, just amazing. That’s the one thing I like, to see students find something they enjoy that is rewarding for them. It’s well worth it for me.” 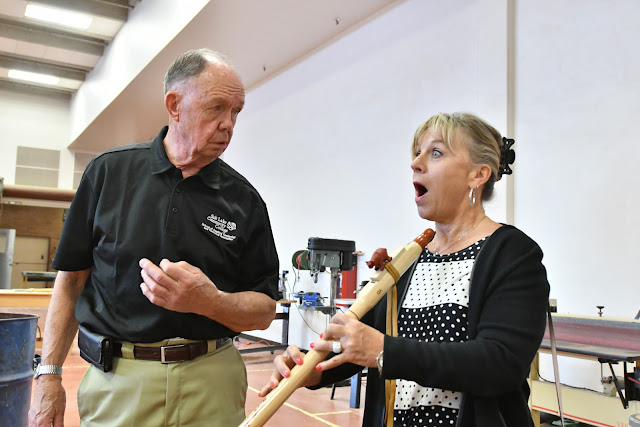 Birth of a Flute instructor Oscar Anderson looks on as SLCC President Deneece G. Huftalin reacts after playing for the first time a flute he made for her.

The draw to Anderson’s class, which counts for three credits as a general education fine arts requirement, is similar for Valdez as it is the other students in the room. They love working with their hands, taking a piece of walnut, maple, poplar, cherry or other variety from about 20 different kinds of wood and making it into a musical instrument – and then actually playing what often ends up looking more like a work of art. Students are required to make, tune and play the flutes.

Laurie Maxfield’s own sons made fun of him when he started the class. Now, however, they and others in his family clamor for the flutes he gives away, but only to people “who genuinely, sincerely want one,” he says. Whether the style of flute playing Valdez displayed is for humans or even animals, the effect is generally the same – prevailing peacefulness. 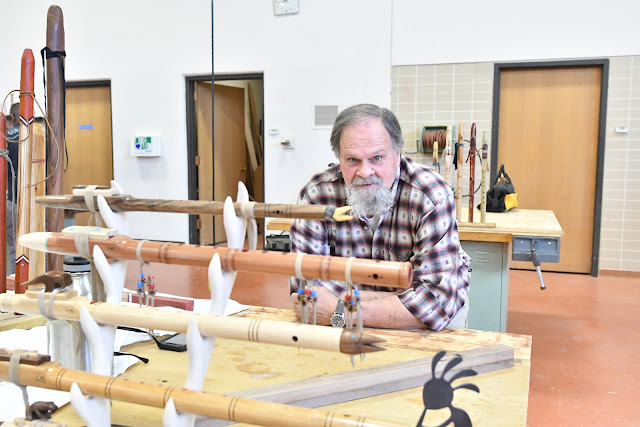 Laurie Maxfield and some of the flutes (foreground) he has made.

Marsha McBride is one of many senior citizens who take the opportunity to audit Anderson’s class, which means they take it for free and do not receive a grade. This is McBride’s fourth year taking the class each semester. While she uses her guitar skills to play for older residents at a memory care facility “to help them remember,” she plays the flute for patients in a hospital setting to help calm them down. “I love the sound,” she says about the flute. “I play just about every day.” On a sleepless night, she’ll wake up, play the flute and note how it even lulls her dogs – and her – to sleep. She also raises goats, and when she takes them to a fair, where they get stressed in an unfamiliar environment, her flute playing puts them at ease. 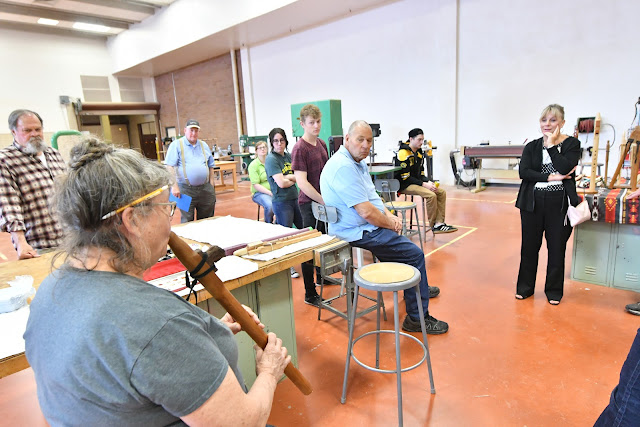 Perhaps most striking about what happens to the flutes made in Anderson’s class, or where they’re played and for whom or what, comes from student John Baker, who has audited the course for the past three years. For Baker, it all started because he liked the sound of the flute, had time on his hands as a retired auto mechanic, and decided it would be fun to actually make flutes. Baker, who served stateside as a tank mechanic during the Vietnam War, has made more than 100 flutes – and most of them he gives away to veterans with PTSD. “They learn how to play,” Baker says. “It’s really relaxing when you play. It just kind of changes their mindset, gets them thinking so they don’t commit suicide. I like that, so, I just keep making them and giving them away.” 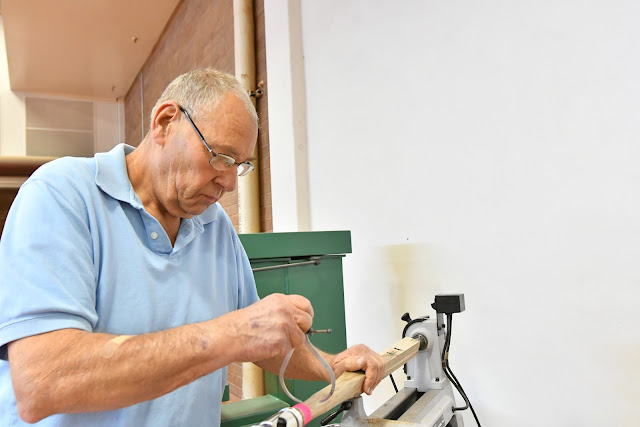 John Baker works on his latest creation in the Birth of a Flute class.

Birth of a Flute class is as much therapy for Anderson’s students, the recipients of flutes as gifts and for the people who either play them or hear them as it is for him to teach the course, which he offers twice a day and into the evening on Tuesdays and Thursdays. “When the second class ends on Thursday,” he says, “I can hardly wait for next Tuesday.” 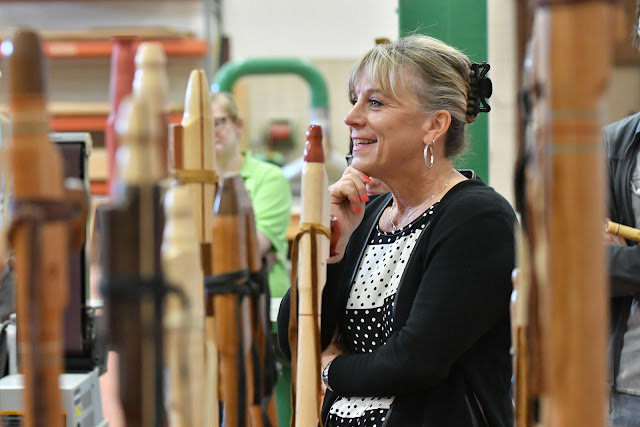 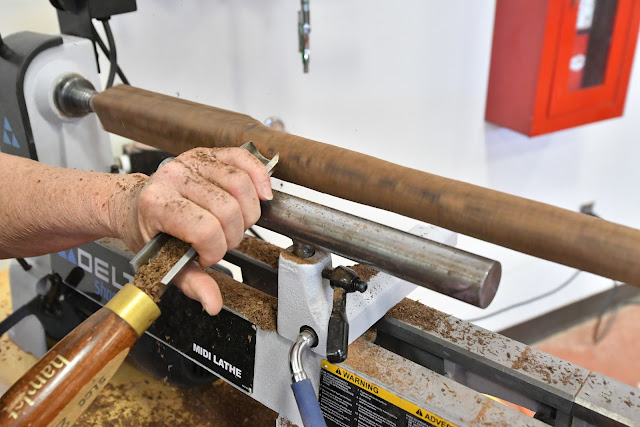 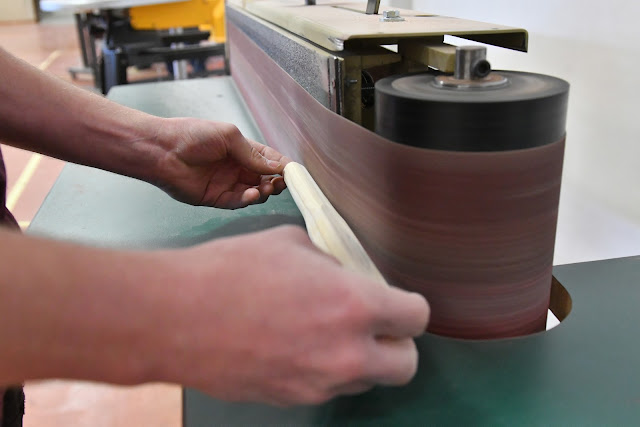 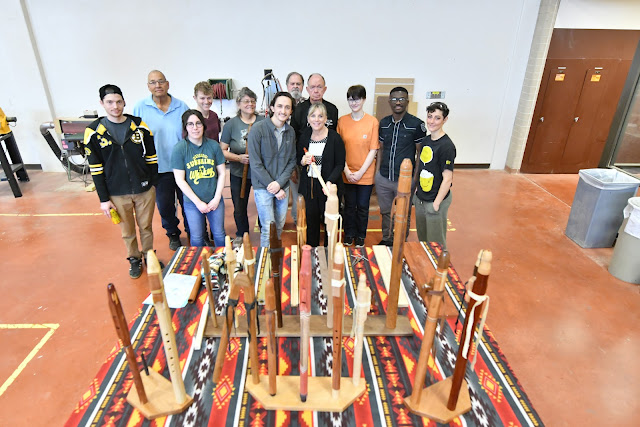