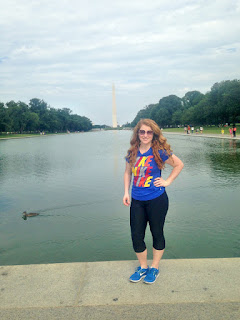 After two months as an intern in Rep. Mia Love’s office, SLCC student Courtney Jones is finding her way in the nation’s capital. The 22-year-old Taylorsville resident shares a few of her experiences:

Hello!
I can’t believe how much time has passed already! It doesn’t even seem very long since my last email, but it has been almost a month! Don’t worry though—I have a lot to talk about.  Obviously time is going by so fast because I am having SO. MUCH. FUN.

Tours
I have given five Capitol tours. With five interns, the tours are pretty spread out. My first tour was so much fun! The family was so cute and interested in everything—especially the kids! My second tour was horrible. It was to a married couple and the wife was relentless with her questions; I feel like she was just asking arbitrary questions to make me look and feel stupid. My third tour was the best, but I’m a little biased because the tour was to my parents who visited DC this past weekend. I had some friends from China come to D.C. so I gave them a tour and we met a family from Tennessee that we took on a tour because they had given us tickets to go to the top of the Washington Monument!

Thursdays
Thursdays are the best day of the week. One of my roommates works in Mia Love’s office with me and we have become best friends. We have Thursdays off together and are able to do a lot on those days! (Sometimes we use them as rest days or run errands—either way it’s so nice.) We have done Paddle Boats in the Tidal Basin, visited monuments and museums. There’s so much to see and so little time, so we are very grateful for our days off. Being volunteer interns, as opposed to our other roommates (one of which is one of the highest paid interns on the Hill), causes us to look for ways to save money. Sara and I often walk Mt. Vernon Trail, a 4-mile walk to the District, instead of paying $1.95 for the Metro. Although it would be nice to get paid, we have decided that having Thursdays off is completely worth it. 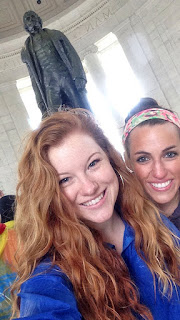 Sightseeing/Museums/Other fun stuff
While my parents were here, I feel like we did almost everything you can do in D.C. and we fit it all into 3 1/2 days! I took them on our trail to see the monuments at night and we were able to see a gorgeous sunset as we crossed the bridge. We went to the Newseum (which had an amazing FBI exhibit and a section of the Berlin Wall), Holocaust museum, National Archives, Smithsonians (Natural History, Portrait Gallery, and American History), The White House, and I gave them a tour of the Capitol. This past weekend, Sara and I went to the top of the Washington Monument and it was INCREDIBLE. The most beautiful view of D.C. by far. On Fridays they do “Jazz in the Gardens” which is live jazz music at the National Sculpture Garden. There’s a huge fountain there that everyone sits around and we all put our feet in. We just walk there after work and it’s such a great way to relax at the end of the week!

Food
Until my parents’ visit, I hadn’t gone out to eat at very many places; I had only been to Carolina Kitchen (AMAZING), Shake Shack (Smokeshack burger is divine), Georgetown Cupcakes, and Good Stuff Eatery for a toasted marshmallow shake. While they were here, we went to Good Stuff Eatery, We the Pizza, Shake Shack, Ted’s Bulletin (Those homemade pop tarts are heavenly), Potbelly’s, and Pinkberry. The food out here is unbelievable!
In the office
• TPA (Trade Promotion Authority). TPP (Trans Pacific Partnership). TAA (Trade Adjustment Assistance). If I get one more phone call asking the congresswoman to vote “No” on TPA I might explode. Everything in this building revolves around fast track right now. Congress passed TPA last Friday and didn’t pass TAA. Most of the constituents calling in have no idea what they are talking about, so we’ve all had to do some major research in order to get a clear understanding for ourselves. The congresswoman actually explained it to us last Friday. I have so much respect for her. She is just so passionate about what she believes in. As she was talking to us, she got the news about Mark Openshaw’s plane crash, so that was really sad. 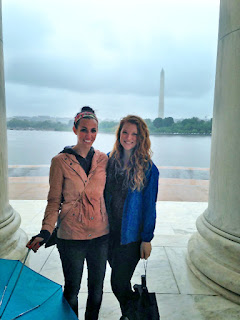 • Do you guys know Rich Piatt of KSL? He works with us as Mia’s PR guy. He’s seriously the coolest. We love Rich. Our scheduler quit a couple weeks ago so we had a “going away” party in the office with donuts and cupcakes from Baked and Wired. It was so much fun and the cupcakes were awesome!

• Mia’s kids were here for two weeks and she had us take them around. It was awesome to get to do touristy stuff during work hours. We took them to the Museum of Natural History, Spy Museum, American Indian Museum, and shopping. They were really cute kids and Mia was so cute with them! It was really fun to see her interact with them.

• We love running errands for the staffers! It’s so nice to get out of the office and roam the tunnels. Some of the other offices have dogs and they are SO CUTE. Chaffetz’s office has Utah truffles, but he’s clear over in Rayburn. It’s still worth it to venture over there though.

• The five of us interns just finished writing an Op-ed that’s actually going to be published in the Deseret News about how the congresswoman’s bill (Know Before You Go) will affect us. I attached the final draft to this email! I wrote about SLCC in it so I think it’s worth a read!

• Basically we do a lot of correspondence, answer phones, and book tours. The staffers usually give us projects to do. Mike is having me organize the handouts that he has been getting from all his meetings and edit a letter that an organization wants the congresswoman’s approval on; Stefanie is having me write a general letter on TPP; and Rich had us work on the Op-ed. I feel like every day brings new projects and it’s all just so exciting!

• The other day, Mia had us meet with her in her office and she just talked to us about how much she appreciates us and how our generation and the youth in general is the reason she is here. She just explained how she wants us to gain as much as possible from this experience and said she’s going to be taking us to hearings with her.

I LOVE IT HERE!! I’m going to be so sad to when I have to leave. This experience is absolutely incredible and I am so grateful for the support from you guys and SLCC.