June 14, 2017
Outgoing Salt Lake Community College Board of Trustees Chair Gail Miller was honored Wednesday by Utah Gov. Gary Herbert during her final meeting with the board.

Herbert recognized Miller and outgoing board members since 2013, Patricia Richards and David W. Lang, for their years of service to the college. Trustee Annie Schwemmer, who served on the board representing the SLCC Alumni Association since 2009, was also honored. Miller recently received the Association of Community College Trustees Pacific Region Trustee Leadership award. 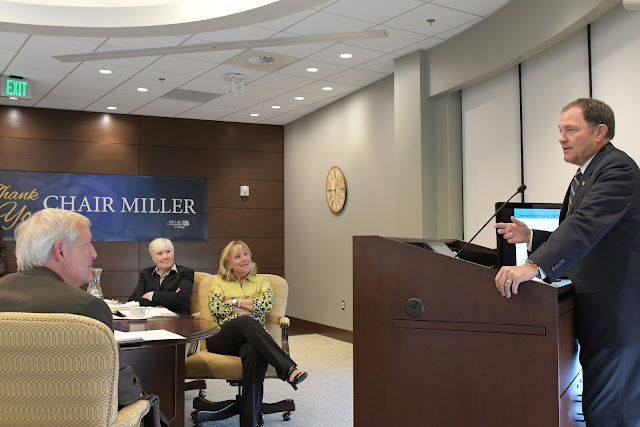 Board Vice Chair Clint Ensign will replace Miller as chair. “Gail, we salute you,” Ensign said. “You are a beautiful and rare lady. None of us fully appreciates the breadth and the depth of your sacrifice and contributions. Your legacy will long reside in the heart and soul of this great college and in our lives as well. You have truly done something that is worthy of being remembered. Today we all join to simply say, thank you, we love you and will miss you, and may almighty God bless you for all you have done.”

Dozens of former and current students, who have benefited in some way from Miller’s generosity, filed into the boardroom with flowers, “Thank you” notes and hugs for Miller. 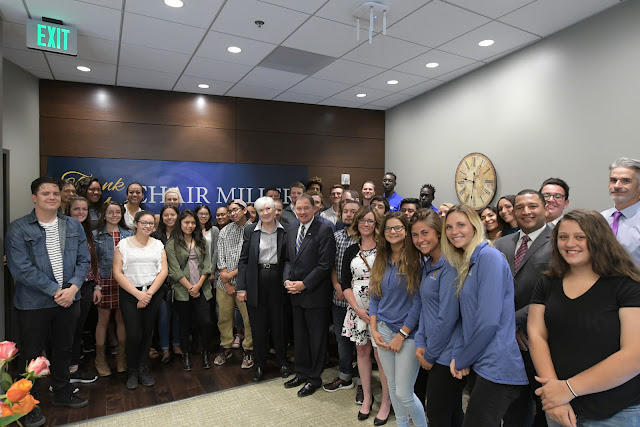 “What a remarkable tribute it’s been – thank you,” Miller said. “All I can say is, thank you. I think that no one has benefitted more than I have from this experience. I have certainly learned an awful lot and am humbled by this experience and the opportunity to try to make a difference in the community that is so important and that means so much to Utah. Learning from each of you and rubbing shoulders with people, who every day spend their lives giving students an opportunity to excel and to be their very best is truly a privilege for me. I will miss being here, and I will never forget my time here.”

During Miller’s time on the Board, she helped support funding for the Center for Arts & Media at South City Campus and the Academic and Administration Building on the Taylorsville Redwood Campus. Between 1998 and 2006, Gail and Larry Miller constructed and donated a $130 million seven-building complex to SLCC known as the Miller Campus, where over 1,000 students access state-of-the-art resources for automotive training, public safety education, entrepreneurial development, corporate partnerships and culinary arts. Gail owns and chairs The Larry H. Miller Group, which operates professional sports teams, automotive, entertainment, media and other enterprises that employ over 10,000 people. Each year Miller lends her name and support to an annual SLCC golf tournament, the Gail Miller Utah Leadership Cup, helping to raise $600,000 over four years, funding more than 30 student scholarships each year.

The Larry H. & Gail Miller Family Foundation was formed in 2007 to allow the philanthropic spirit, which Larry and Gail have so graciously established, to continue for generations to come. Larry H. Miller built a legacy of giving back to the communities where he conducted business. The Millers’ love of education inspired them to create the Larry H. Miller Education Foundation. Instituted in 1996, its purpose is to provide educational assistance to dependent children of full-time employees of the Larry H. Miller Group of Companies. Since its inception, the LHM Education Foundation has helped more than 3,150 students at 60 different universities or trade schools throughout the United States. 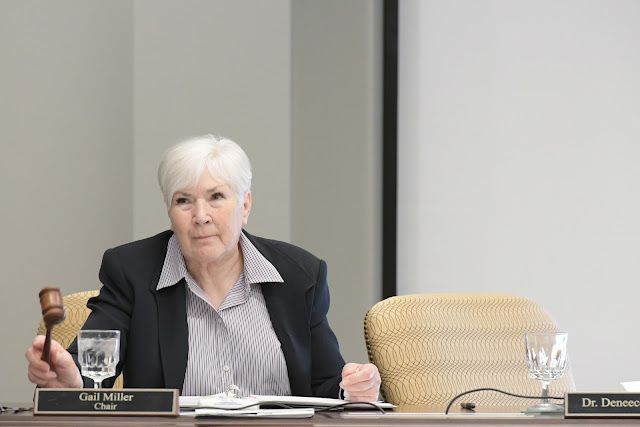 Gail Miller bangs the gavel to bring her final meeting to order.

Richards is president and CEO of SelectHealth. She began her career in healthcare as a staff nurse in general surgery and trauma at the University of Michigan Medical Center. “She and her husband Joe are great believers in career and technical education and have established a scholarship at SLCC to support students heading into CTE fields,” Herbert noted. 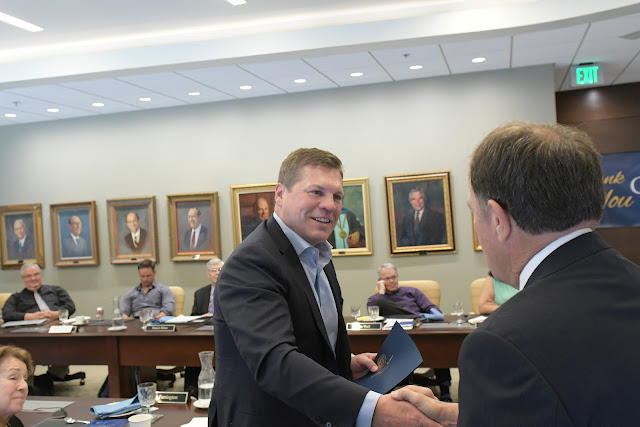