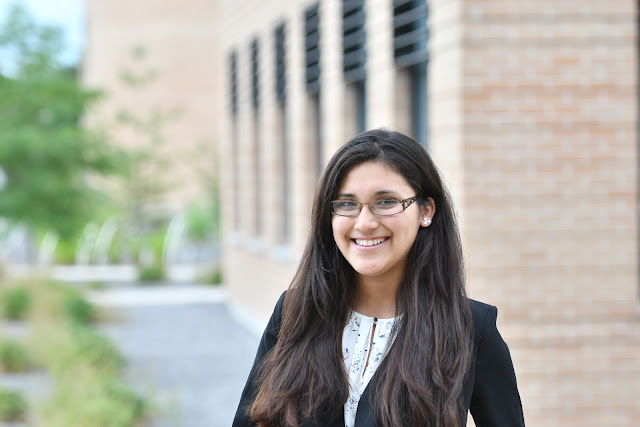 Elizabeth Gamarra’s parents took a risk and gave up everything they had worked for in Peru for a better life in the United States. They took turns working and going back to school, learning English along the way. And they started their American higher ed experience at Salt Lake Community College.

“I stepped foot on this campus when I was seven or eight,” Elizabeth Gamarra says of the Taylorsville Redwood Campus. “I saw my parents fight for what they wanted.” Her parents wanted better opportunities for their children, and Gamarra has taken full advantage of every opportunity that has come her way.

Gamarra’s early academic ambitions took root at the Salt Lake Center for Science Education as a high school student, during which time she completed concurrent enrollment classes at SLCC, the same campus where her mother was working.

While at SLCC, she helped start Amigos Mentores, a peer mentoring organization for students. She earned her associate’s degree in social work, and at the age of 17 transferred to the University of Utah. “I was inspired by my parents, and I saw how it fit into what I wanted to do,” Gamarra says.

In 2017, Gamarra earned a master’s degree in social work from the U, and by the time she turned 20 in May of that year she was finishing a fellowship at Oxford University as part of a consortium for human rights.

While at Oxford, she received an email notifying her that she had been selected as a Fulbright Fellow to teach a basic human rights class at Instituto de Empresa University in Madrid for one year beginning in the fall of 2017. “I called my parents about 1 a.m. their time – they thought something bad had happened to me,” she recalls.

Before heading off to Spain, in the summer of 2017 Gamarra traveled for fellowships to Switzerland and Greece, where she worked at a Syrian refugee camp. She also gave a TEDx talk in front of more than 2,000 people in Salt Lake City about refugees and human rights.

Last month, Gamarra, now 21, returned from Spain, and she is now preparing for a two-year leave to Tokyo as part of her prestigious Rotary Peace Fellowship, a $70,000 award given to a handful of graduate students “committed to becoming catalysts for peace, conflict prevention and resolution.” After studying at International Christian University in Japan, Gamarra will have earned a second master’s degree. Her sights are set on someday studying international law, possibly as a Rhodes Scholar (she was a finalist for the award), or either studying law in the U.S. or working in France in some capacity dealing with migration issues.

Gamarra traces all of her success to her upbringing. “Ever since I was a kid, I’ve met people who are transforming society at all different levels, some on a global scale,” she says. “The idea of service is ingrained in my mind. My mom has helped thousands of students, and they remember her.”

For students trying to find their own paths, Gamarra has some advice: come up with at least a rough idea of what you want to do, because “no one else will have that vision for you;” incorporate service along the way, “so you are able to receive as much as you give;” don’t be intimidated by whether you might feel too young or too old to reach your goals, because “age is really a number;” meet the “right” people; invest your time in acquiring skills in negotiating, public speaking and persuasion instead of focusing on a title or position you want to reach someday; and, stay humble, a trait she attributes to her father. “I have met many people who have lost that humble aspect,” she says. “That’s something I definitely don’t want to lose.”