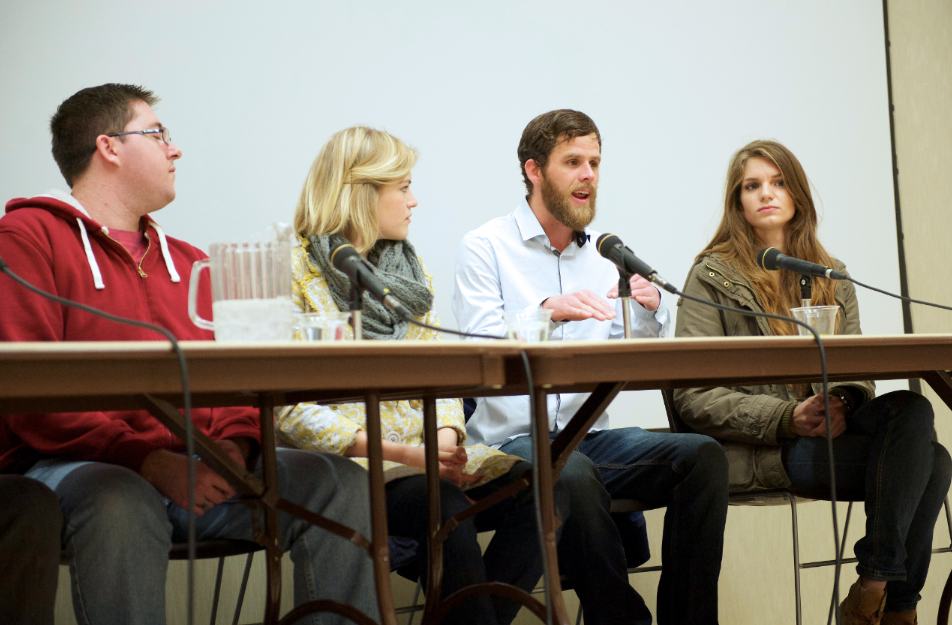 Following your passion may mean that, for a while, your main source of income relies on the question, “May I take your order?” Which is why parents will often try to steer their college-age students away from academic paths that center on the arts.

The panel was made up of students who have been or are going through the theatre, video production, music technology, visual arts, web design and film programs. They spoke to students, staff and faculty in the Multipurpose Room at the College’s Center for Arts and Media on South City Campus in Salt Lake City.

Film student Joe Olivas had high praise for the new Center for Arts and Media, comparing it to other facilities at other schools.

“They don’t even come close to what we have here,” Olivas said. “The opportunities afforded in the film department are unbelievable. The gear we can get our hands on is top of the line. And it’s real-world experience that translates directly into working on a set. There’s nothing that you will encounter on a (professional) set that you can’t, with effort, accomplish here.”

Olivas and other panelists talked about the need for more collaboration between departments at the Center.

“I wish that there was more interaction here,” said Video Production student Keith Chalmers. There were times, he noted, when he needed a graphic designer or musician to help on a video project. “Students need access to students in different disciplines.”

Chalmers and Visual Art and Design student Kevin Landeen agreed that faculty at the Center push students to do their best.

“There’s a lot of faculty who really do push us,” Landeen said. “The teachers treat us like we’re professionals.”

Although younger and inexperienced, relative to veteran industry professionals, several of the panelists reported finding jobs that pay, rather than working for free while just starting out (as is often the case for students in the arts).
“I don’t have to work for free anymore,” said Olivas, who encouraged students in the audience to not be averse to working for free in the beginning. “The passion has to be first and foremost, because for a lot of artists you have to work a day job. You have to put in 40 hours a week to pay your bills and, if you want to go into art, you have to be willing to work an additional 80 hours on top of that 40 hours.”

Theatre student Annie McCallson said she has found paid work posing as a patient for nursing students at the College. An aggressive and talented Ryan Moody, studying Music Recording and Technology, has managed to blend is DJ skills with jazz ensemble groups. Moody has also been working on a wearable MIDI (Musical Instrument Digital Interface) controller that may soon reap financial dividends.

“I wish there was more kids who knew about this program that could come do it,” Moody told the audience. “Because I know it changed my life – everything, the trajectory I was on and that I’m on now. I can’t really compare them, because I no longer am fearful of my future because of the skills I’ve been able to learn here through the facilities and real-world training.”

Web design student Jamie Townsend likes that the instructors at the Center are also working in the industries for which they’re preparing students.

“We are actually learning something that they do in real life every day,” said Townsend, who is also finding paid gigs early in her career.

Several panelists urged students to ask questions, even if it means getting laughed at once in a while.

Panelists also talked about the benefit of having the best equipment at their fingertips.

“Don’t be willing to never touch the gear in your class,” Olivas said. “Fight to the front of the crowd and tell your teacher you want to use it that day. That’s your opportunity. If you go a week in the film department and you haven’t touched a piece of gear, you’re doing it wrong.”

Panelists and audience members actually networked during the discussion as they talked about the very same subject.

“It’s about the connections,” said Chalmers, who is currently doing an unpaid internship with Channel 4. “I’m out there to show them that I really want to do it.”